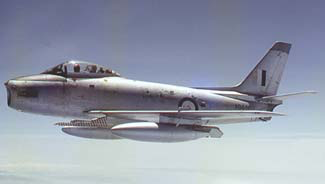 The F-86 Sabre was the USAF’s first operational swept-wing fighter. The prototype first flew in 1947 and broke the world speed record with a full combat load; it achieved 1080 Kmh, or 600 Knots.

Following the decision in February 1951 by the Australian Government to purchase the Sabre in lieu of the British Hunter, Commonwealth Aircraft Corporation (CAC) built 112 Sabres with the Rolls Royce Avon RA7 engine, which gave it superior performance. The first official flight of the Avon Sabre was in August 1953 from Avalon airfield. It was introduced into the RAAF in September 1954.

The Sabre was equipped with two 30mm Aden cannon and later with two Sidewinder air intercept missiles, (AIM9). Together with the Avon engine, the swept wing gave the Sabre an impressive rate of climb and a service ceiling of about 50,000 ft, or 15,240 metres.

The introduction of the Sabre provided a significant technology boost for the RAAF and Australian industry. It was Australia’s first swept-wing aircraft, it had powered flight controls and could exceed Mach1 (sound barrier) in a shallow dive, safely.

After the Vampire and Meteor, the Sabre was a pleasure to fly. The cockpit was well designed and roomy, the pilot sat high with very good visibility all round, it had excellent, well laid out instruments and modern systems, including radar ranging for the optical sight.

However, the rapid advance of aircraft design in the 1950s produced fighters superior to the Sabre. Even as 78 Wing deployed to Butterworth in 1958-59, the Sabre had been superseded as an air superiority fighter in USA and USSR, and many allied countries.

The concepts and public debates in Britain (including the RAF) in the 1950s that fighters were on the way out, to be replaced by missiles, gained no impetus in the RAAF. RAAF missions to replace the Sabre had started as early 1954, but the first serious mission was in 1957. The F-104 was considered, but rejected because of its limitations in other than the air intercept role. No other contenders were suitable.

Another RAAF fighter evaluation team went overseas in 1960. Out of a field of five, the Mirage III was selected as the best aircraft to meet the RAAF’s requirement.

The Sabre was phased out of the RAAF in 1971. Thus ended the service of the ‘Gentleman’s Aircraft’, an accolade well deserved.