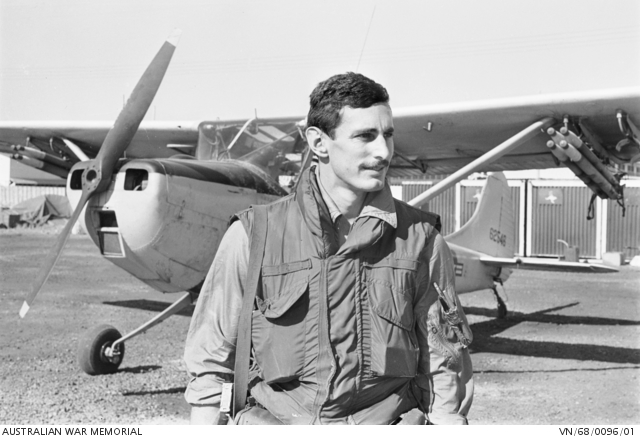 Thirty six RAAF pilots flew as FACs – Forward Air Controllers – in South Vietnam. They were selected from fighter pilots with at least two tours and served with the USAF for terms varying from six months to a year. As ‘on scene’ air commanders they controlled close air support for friendly forces and integrated it with other support from helicopter gun-ships and artillery.

The FACs varied in rank from Flying officer to Wing Commander – all had worked under FAC control in the Korean War, the Malayan emergency or with peace-time training in Malaysia, Thailand or Australia. Added to this experience was a joint warfare course and dedicated FAC training in Australia or with the USAF in South Vietnam.

Although posted to USAF squadrons controlled by the Tactical Air Control Centre in Saigon, they usually worked from forward locations where they were quartered with the Army units they supported. Tasking normally was received overnight and flying began at dawn and continued all day. They generally flew a 2.5 to 3 hour mission each day, seven days a week, and did standby duties as well.

The work was very demanding and often dangerous. Mission preparation was extensive, with briefings at division or brigade level on troop positions, call signs, frequencies and tactical plans. Before flight advice on artillery firing was obtained so they could plan to keep clear. Further friendly fire advice was sought during the mission and plans varied as required.

Once in the area they used a number of communications networks to link with ground forces, ground attack aircraft and other allied forces. This added to the already high work load on task, which typically consisted of locating friendly units and targets with panels or coloured smokes and flying random patterns so as not to telegraph the target area. Fighters arrived via pre-determined rendezvous points and were given specific briefings on arrival. During the attack, the FAC would fly a racetrack pattern to one side of the target or some other pattern that allowed him to keep the target, the friendlies and the fighters in sight so he could control the various attack runs.

The best FAC aircraft was the purpose-built OV-10A ‘Bronco’, with twin turbo-prop engines, superb visibility, a comprehensive communications fit and tandem seating that allowed an army observer or safety pilot to be carried to help with the high workload. The Bronco carried rockets and machine guns, loitered at 110-180 kts, could reach 350 knots and had excellent short landing performance thanks to the wash from contra-rotating propellers which generated lift and produced very good low speed control, allowing landings in as little as 1500 feet.

Although well trained, RAAF FACs faced the added difficulties of flying in a different air force that operated on a much larger scale than the RAAF. There was little direct supervision and their tours demanded high levels of self-discipline and responsibility, demands that were well met by all 36 despite high work loads in the air and constant danger while on task.