Every conflict has its tragic stories. However, I am sure among the worst are those where there has been no confirmed death or whereabouts of a missing veteran who are recorded as Missing in Action (MIA). And, so it was for Flying Officer Michael Herbert and Pilot Officer Robert Carver of No 2 Squadron whose Canberra aircraft A84-231 (call-sign Magpie 91) was lost in South Vietnam on the evening of November 3, 1970.

The airmen, both 24 years, departed Phan Rang airbase on a routine bombing sortie near the Laotian/South Vietnam border.  They were never heard from again. 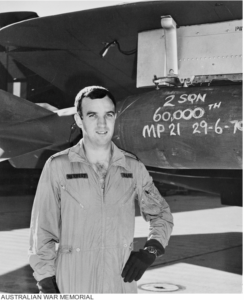 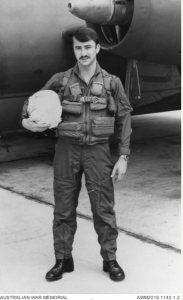 A subsequent Court of Inquiry into the disappearance found no obvious reason for the loss. There were no enemy aircraft counter measures employed in the region and the weather was fine. The aircrew were competent aviators. Michael had flown 198 combat missions and was an experienced Canberra pilot.  He was looking forward to his return home in several weeks. Robert was a recent arrival at the Squadron but had already impressed his superiors for his airmanship qualities.

The stress on their families, friends and fellow members of No 2 Squadron must have been tremendous. As a No 2 Squadron Vietnam veteran, I had returned to Australia a year before and was deeply shocked by the loss. Young people tend to think they are ‘bullet proof’ and we thought the Canberra was an unlikely candidate for a combat loss. The inevitable thought of whether the lads had been held as prisoners of war (POW), like so many US forces aviators, would have tormented family and friends over the years that followed. Michael’s mother corresponded with political leaders in Vietnam and Australia urging them in vain for information on her son’s disappearance.  Robert’s father had his son’s name engraved on a Toowoomba War Memorial.

Nearly 39 years later, the jungle gave up its secret. Major John Thurgar (former SAS Trooper during the Vietnam War), from the Australian Army’s History Unit, and Squadron Leader John Cotterell uncovered the wreckage of Magpie 91. It appears the crash site had been sighted sometime in 1982 by several hunters from the Katu people who reside in eastern Laos and central Vietnam.  However, for a range of reasons, not the least being the sheer impregnability of the terrain and the dense jungle near the crash area, the discovery was not investigated.

The formal discovery of Magpie 91 can be attributed to the gallant efforts of Dr LTCOL (Retd) James ‘Jim’ Bourke, AM, MG, PhD of Operation Aussies Home (OAH).  A two-tour Vietnam Veteran, Jim committed himself to investigating and accounting for ‘The Forgotten Six’ Australian servicemen listed as MIA during the Vietnam War.  Jim led a privately funded team to locate and retrieve the remains of six missing Australians—among them Michael Herbert and Robert Carver.

Jim spent many thousands of hours researching the details of their sortie and battle reports, and lobbying politicians and bureaucrats for support. When his pleas fell on deaf ears, he went ahead with his plans and together with a small team, he set off to Vietnam to find the missing airmen who never made it home. Sadly, Jim Bourke passed away on September 25, 2015 aged 72 years.

On August 31, 2009, the caskets with the remains of Michael Herbert and Robert Carver arrived on board an RAAF C130 that had brought them from Hanoi to RAAF Base Richmond. It is an emotional moment in No 2 Squadron’s history and especially for those airmen who served in the Squadron during the Vietnam War.

On November 2, 2020, a Lockheed Hudson aircraft will fly over the Australian Wa r Memorial, Canberra to commemorate the Anniversary.  Hudsons formed part of No 2 Squadron’s fleet during WW2.  The Australian War Memorial’s Last Post Ceremony that evening will be dedicated to Pilot Officer Robert Charles Carver.

On November 3, No 2 Squadron will conduct a flypast over the RAAF Williamtown airbase, now the home of the Squadron. The Air Force Association is most grateful for the RAAF’s support. 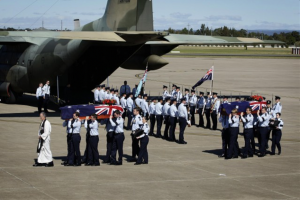 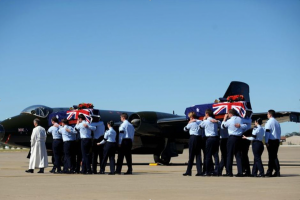 NEWS HEADLINES  The Royal Commission into Defence & Veteran Suicide will consult with veteran support organisations on the draft Terms of Reference.  The Morrison Government recently announced it would request the Governor-General to establish a Royal Commission...

NEWS HEADLINES  At the going down of the sun, and in the morning, We will remember them. Lest We Forget.    Click on image below to view Last Post video.  (Video courtesy Peter Colliver, OAM - Air Force Association)   MORE NEWS

NEWS HEADLINES  The Air Force Association welcomes the opportunity to provide input to the Honours and Awards Inquiry on the notion of recognising members and families of Australian Defence force members who are injured, wounded or killed in, or because of, service....

NEWS HEADLINES   The Royal Australian Air Force will mark its 100th anniversary with a mass flypast over Canberra – a rare and exciting opportunity to see a wide range of current and historic military aircraft.   On Wednesday 31 March 2021 Air Force is marking is...

NEWS HEADLINES  In this edition we celebrate an Air Force milestone and look back on the RAAF's early years.   MORE NEWS

NEWS HEADLINES  The Air Force Association has congratulated Air Force on its decision to reform No.100 Squadron, which operated between 1942-1946 in the defence of Australia against the Japanese during WWII.   AFA President Carl Schiller said, “Throughout its...

From the President – February 2021

NEWS HEADLINES  Despite the downsides of 2020, the year provided several positives that I will cover in this report. We can be easily drawn into the gloom with much of the news and social media focusing on the negatives.  I’m not against social media.  However, if...

NEWS HEADLINES  The latest edition of Wings magazine - the official publication of the Air Force Association - is out now. Please click on the image below to access or subscribe for your hard copy here.    MORE NEWS