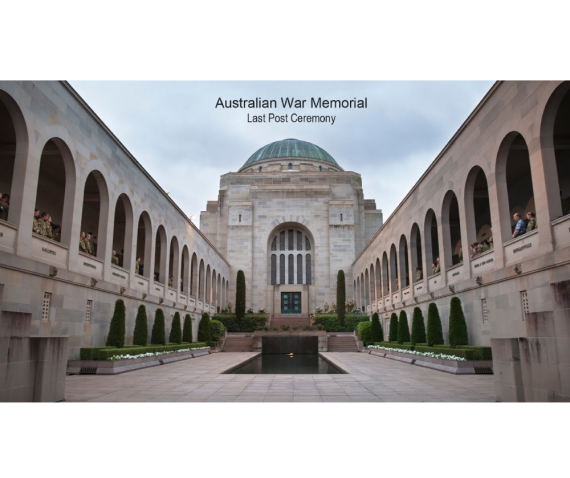 Stories of bravery, service and sacrifice are told when the Last Post Ceremony is held at the end of each day at the Australian War Memorial (AWM) in Canberra.

Each evening, the AWM shares the story of an individual on the Roll of Honour which commemorates members of the Australian armed forces who died while serving. Each of the 364 Last Post stories told each year is researched by AWM historians.

At the ceremony last week, Peter had the opportunity to meet Elizabeth Rowell, the niece of Flying Officer Rowell, and hear her family’s story of sorrow at their loss. 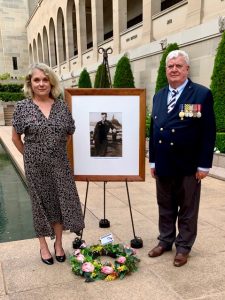 Flying Officer Rowell was lost over the North Sea on return from a bombing mission over Germany in 1944. He is listed on the Runnymede memorial which commemorates more than 20,000 airmen and women who lost their lives during World War Two in operations from bases in the United Kingdom, and north and western Europe, who have no known grave.

The ceremony heard that Edward, or Teddy, was born in Sydney in November 1921 and he attended high school in Lismore, Newcastle, and North Sydney before going on to work at the Bank of New South Wales in Cootamundra.

He was part of the Empire Air Training Scheme where he was one of 27,500 RAAF pilots, navigators, wireless operator/gunners, and engineers to join RAAF squadrons.

He did his elementary flight training in Australia then later in Ontario and in 1944 he joined a training unit at RAF Silverstone where he trained as a night bomber pilot.

In September 1944 he was posted to Number 467 Squadron, an Australian squadron under the command of the RAF which consisted of a mix of personnel from various Commonwealth nations.

On 23 October 1944, he was a pilot of a Lancaster four-engine heavy bomber tasked to carry out a bombing attack on enemy targets in south-west Netherlands.

Historians say that in the face of bad weather, and reinforced anti-aircraft defences, the RAAF squadrons involved lost three aircraft, had five more badly damaged and thought that many of their bombs had overshot the target.

Rowell’s aircraft never returned and Teddy, aged 22, was presumed to have died that day.

AFA Director of Communications Deanna Nott said every Last Post Ceremony was exceptionally special and moving for the descendants, families and AWM visitors who are able to lay wreaths and pay tribute to those on the Roll of Honour.

“Most importantly, the Ceremony is also the sharing of a unique and personal story, a reminder to us that every individual who served was part of a family, a community and had their own hopes and dreams,” she said.

“The Air Force Association regularly attends the Last Post Ceremony, because apart from paying our respects, it is another way we stay connected to family and community. We encourage our members to be involved whenever possible.”

You can register for a ticket via the Australian War Memorial’s website https://www.awm.gov.au/visit.

NEWS HEADLINESThe Department of Veterans Affairs has been working towards closing MyAccount for the last 12 months and has advised that MyAccount will be closed on 10 December 2021. A number of  initiatives have been put in place to ensure all My Account holders are...