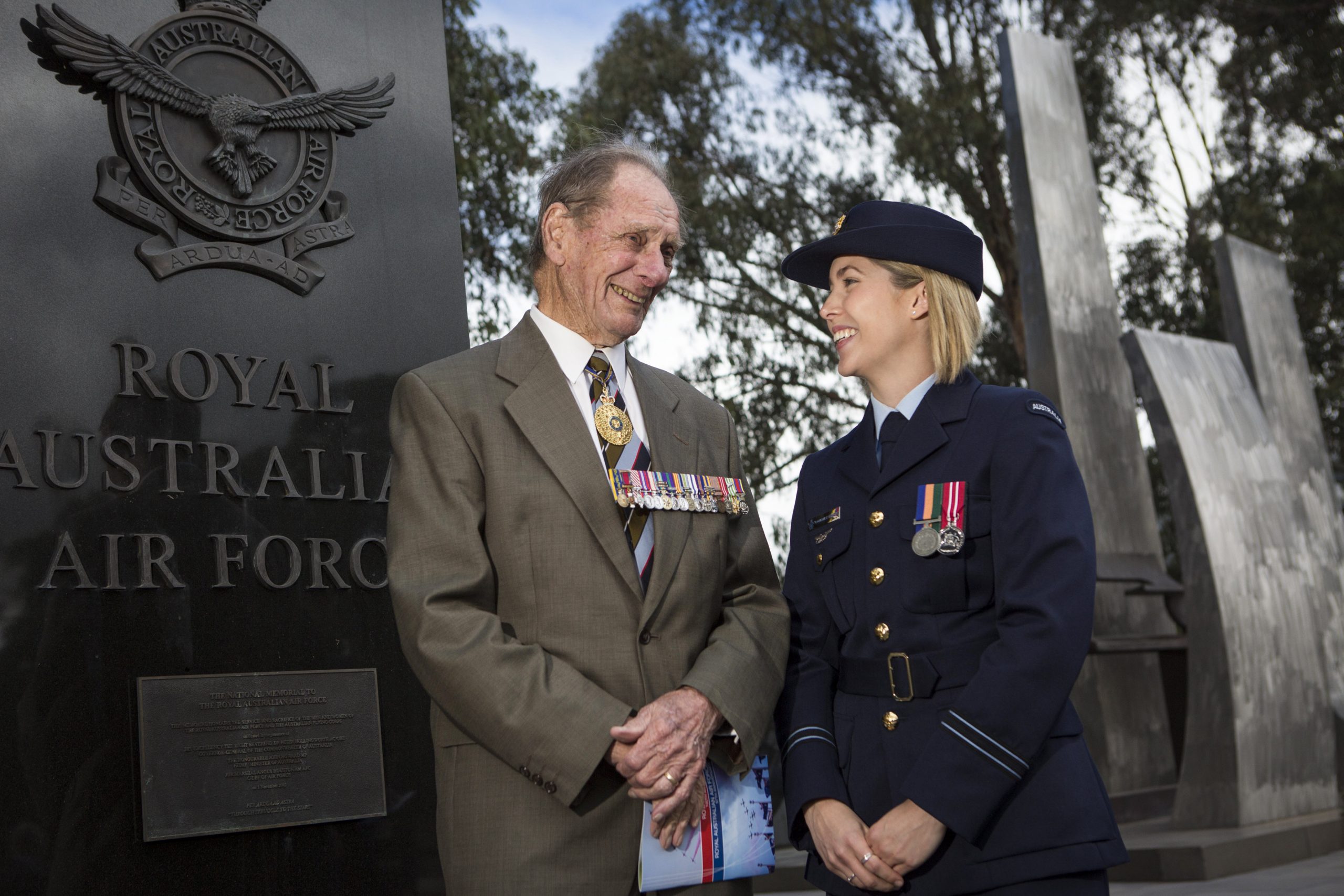 From humble beginnings, Air Marshal Selwyn David Evans AC, DSO, AFC RAAF rose to be one of the most notable commanders in the RAAF’s first century. Air Force Association National President, Carl Schiller remembers a giant of the RAAF.

Few other Australians would warrant the attention given to Air Marshal Selwyn David Evans on Wikipedia. The entry provides comprehensive detail of his service-related life and achievements from his enlistment in the RAAF in 1943 to his passing at age 95 on 2 September 2020.

From humble beginnings, he rose to be one of the most notable commanders in the RAAF’s first century. His achievements were many.  David Evans, as he was commonly known, will be remembered by all who engaged him. Despite his sometimes-gruff demeanour, he was a kind-hearted and caring gentleman who had a genuine respect for his fellow comrades.

Like many of our WWII aviators, David Evans’ interest in aviation started at a young age.  As a young teenager, he was a founding member of the Air Training Corps.  It’s very likely his aviation interests further developed with the influence of many of his instructors who were Australian Flying Corps WWI veterans. Not surprising, he enlisted in the RAAF at age 18 and was selected for pilot training. He was declared competent as pilot in January 1944 and later graduated as a sergeant pilot.  However, his sights of being a service pilot seemed doomed when he was to become part of the RAAF’s demobilisation following the end of WWII. Perseverance won the day, and after a convincing argument he was retained as a flight sergeant pilot.

Warrant Officer David Evans was commissioned on 3 March 1947. He married Dorothy (Gail) Campbell in 1948, but their early married life was short-lived when David was required to take part in the Berlin Airlift flying C47-Dakotas from 1948-1949 during which he fly over 250 sorties.  This was start of many separations the couple endured during their long and happy married life.

David Evans received the Air Force Cross in 1957 for his tour of duty as VIP captain in the Governor-General’s Flight. Many former veterans would distinctly remember his association with the Canberra bomber being a flight commander, and later the Commanding Officer of No 2 Squadron during the Vietnam War for which he was awarded the Distinguished Service Order. 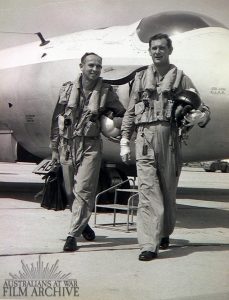 Above: David Evans (R) with his navigator next to a Mk21 Canberra trainer in Butterworth. (Image courtesy Australians at War Film Archive)

In his autobiography, David recounts the peculiarities of the Canberra bomber and its dubious capabilities as a reliable weapon. He can be credited for resolving its twin-engine flame out issues and improving bomb-on-target capability.

David Evans was promoted to group captain in January 1969 and in the role of Director of Air Force Plans was instrumental in the Government’s decision to gift the RAAF’s remaining aging Sabre aircraft fleet to the Indonesian Air Force.  David’s list of aircraft type flown was likely greater than any other RAAF pilot of his time.  Single and multi-engine propeller, single and multi-engine jet, including the F-111C swing-wing bomber, and the UH-1 Iroquois helicopter are listed in his logbooks. Indeed, it is likely no future RAAF pilot will have the opportunity to achieve mastery of such a diverse range and number of aircraft types.

As an air commodore, David Evans commanded RAAF Base Amberley in the mid to late 1970s after which he was destined for senior staff positions following his earlier career as a very capable aviator and insightful commander.

His appointment as Chief of Air Force Operations at the rank of air vice-marshal was focused on improving the RAAF’s strategy for the defence of Australia.  For decades, he had strongly advocated the establishment of RAAF Base Tindal with a resident fighter squadron. His appointment as Chief of Joint Operations and Plans for the ADF followed. He was appointed an Officer of the Order of Australia in 1981. In 1982, David became Chief of the Air Staff, focusing on air power doctrine, morale, and unrelentingly improving Australia’s northern defence capability. He was elevated as a Companion of the Order of Australia in 1984.

In retirement, David Evans continued to enjoy the fellowship of his Air Force mates and was a member of No 2 Squadron Branch of the Air Force Association.  He authored two military critiques: A Fatal Rivalry:Australia’s Defence at Risk; and War: A Matter of Principles. He wrote and lectured extensively on air power and became a visiting fellow at the Australian National University’s Strategic and Defence Studies Centre.  His autobiography, Down to Earthwas published in 2011.

David Evans was a man of many notable achievements.  However, I’d like to think his greatest role and testament to the man was that of caring for the love of his life, his cherished wife for 71 years, Gail who sadly passed away in 2019.  He was a much-loved father and father-in-law, grandfather and great grandfather.

May God bless him.
Lest We Forget.