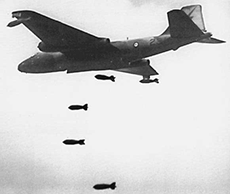 The Canberra’s first public flying display was at Farnborough in September 1949 and it stole the show. The aircraft met with immediate success and about 1400 were built in UK, USA and Australia.

The Canberra set many speed and performance records throughout the world and has proven itself in many conflicts. With its low wing loading and power, the aircraft could outperform many of the jet fighters at the time.

The RAAF operated 52 Canberras – bombers and trainers. Early versions of the B2 variant (called the Mk 20 & Mk 21 in the RAAF) had Rolls Royce Avon Mk1 engines, while later versions had the more powerful Mk109 engine. The bomb load was significant for its day – the Canberra could carry 6 x 1000lb (455Kg) bombs at speeds up to 450KTAS (840Kmh) at low and high altitudes. It had a ferry range in excess of 2500 n miles (4600km). Click here for the technical specifications – as used at No 2 Squadron at the time the Canberra was retired from service in 1982.

After 15 years in RAAF service, the Canberra reached the peak of its service life during operations in South Vietnam. It was a very accurate low level tactical bomber, had a large bomb load and could remain airborne for 3 – 4 hours. While flying 5 % of the 35TFW sorties, it was credited with 16% of the Wing’s bomb damage assessment. It filled a gap in the USAF capability inventory.

The Canberra was retired from service in Nos 1 and 6 Squadrons in 1971, when the F-4E Phantom was introduced, and finally from No 2 Squadron in 1982. It was the “Queen of the Skies” during its service in the RAAF.