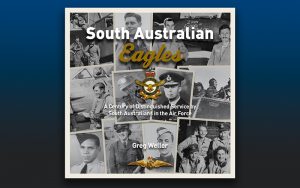 “Some are decorated aircrew. Some are air aces. Others rose to the highest echelons of our air force. Some returned to South Australia serving the community in other ways in sport, indigenous reconciliation and the arts. Tragically, some did not return paying the ultimate sacrifice for their nation.”

Hardcopies of South Australian Eagles will be available at Air Force Centenary events in South Australia during 2021. 150 copies will also be donated to local schools.